...i should probably scour the libraries before i post this...anyways i was wondering if there was a site or some really good source other than the UNSW and wikipedia that provided that provided information on cyclodextrin, like its uses, how it was developed (a bit of the history), enxymes used and stuff like that...the second thing i wanted to know is...is there a legend or a key that i can use because i cant find a single site that gives a decent explanation...refer to picture below... 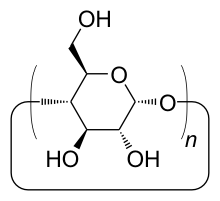 ...like what the hell do the dark bold thick lines mean?...do the intersection of lines with no atoms on it mean that there is a carbon on it?...what does the dashed lines mean and where there are spare electrons, are the hydrogen atoms meant to go there?...as in if carbons are the intersections of the image then youll notice that a carbon or 2 have 1-2 spare electrons do the hydrogen atoms go there?...

EDIT: ...oh and i almost forgot is the image even a monomer/polymer of cyclodextrin?...
M

http://astrobiology.berkeley.edu/Mars101/pix/cyclod1.jpg for an image of cyclodextrin

as for research on cyclodextins have you tried Google
Last edited: Nov 26, 2009
N

...then im guessing that the extra electrons off the carbons are where the hydrogen atoms go?...

no one said:
...then im guessing that the extra electrons off the carbons are where the hydrogen atoms go?...
Click to expand...

In a sense, yes, you are right. Assuming that you are familiar with the idea of polymer - you can think of cyclodextrin as a cyclic polymer, if that makes it any easier.

The way you read the structure that you posted is that there are however many glucose monomer units (n units) connected together with each ends tied up to give you a cyclic structure (hence the very long line that goes from the oxygen to the carbon on the other side).


no one said:
...like what the hell do the dark bold thick lines mean?
Click to expand...

Just to expand a bit on what mdmm92 posted earlier - not only do they bold and dashed lines show the relative position of things in space, the reason that they are there is to show stereochemistry because most of the carbon centers are chiral the physical and chemical properties could be different depending on whether it's "into the page" (dashed line) or "out of the page" (bold line).

no one said:
...do the intersection of lines with no atoms on it mean that there is a carbon on it?
Click to expand...

That is correct. This should be taught early in the Preliminary HSC syllabus.

no one said:
and where there are spare electrons, are the hydrogen atoms meant to go there?
Click to expand...

Hydrogens are only implicit for carbon centers when not shown. If hydrogen atoms are connected to nuclei other than carbon, it must be shown explicitly. As for your question regarding spare electrons - while drawing these structures you should be following the octet rule - that is, each atom should be adjacent to 8 electrons; and that there should be no unpaired electrons. (Note that one bond = two electrons) Let's talk about normal cases (and when things are not charged), for example, carbon should always have for bond next to it (including the bonds to hydrogen that are not otherwise shown); oxygen should always have two bonds next to it. You might ask, then, where are the other electrons for oxygen? Well, oxygen, due to its electronic structure, already have two pairs of paired electrons (four in total), so by forming two bonds (four electrons) it will have satisfied the octet rule. This is also why water is bent but not linear - but that's out of the scope of this discussion.

no one said:
...as in if carbons are the intersections of the image then youll notice that a carbon or 2 have 1-2 spare electrons do the hydrogen atoms go there?...
Click to expand...

I think I have explained that one just now.

...thanks although im trying to use/find non-wiki sources because well literally some idiot can go on and say "im the best" or delete every second word and itll be screwed up...although so far every forum has suggested the wiki page, plus i cant find much/decent stuff so i guess i have to use the wiki page then...

I know what you mean. Wiki is actually pretty good though even though everyone can edit it. They did some studies on general and specific things regarding Wiki and how it compares to other encyclopedia sources - it's actually about the same if not better.

I had a quick look just how and the chemistry doesn't look fishy to me. Not sure about the history though - but I doubt that anyone can be bothered to mess up the history section of a scientific article .

Is this new in the HSC syllabus? I've never noticed anyone asking about cyclodextrins before. Then again, I haven't been around for a year or two now.
N

...well you were given the choice of polyhydrobutyrate, polyhydroxyvalerate, cyclodextrin, PHB-PHV copolymer or polyactiv acid...i just so happen to get cyclodextrin as my focus biopolymer...

no one said:
...well you were given the choice of polyhydrobutyrate, polyhydroxyvalerate, cyclodextrin, PHB-PHV copolymer or polyactiv acid...i just so happen to get cyclodextrin as my focus biopolymer...
Click to expand...

Ah. That sounds like a syllabus disaster to me. I just wish that they would stop hiring idiots and/or politicians to write the syllabus and exam questions...

...well one last question...has there been any recent development in cyclodextrin?...cause i think thats one part of the assignment that wikipedia doesnt cover...

Of course there has been recently developments related to cyclodextrin! They range from molecular devices to drug delivery. The following may be useful:

I quite like cyclodextrin based [URL"http://en.wikipedia.org/wiki/Rotaxane"]rotaxanes[/URL]. However this one may be a bit too technical and doesn't have any "real" use at the moment apart from being cool.

An article from the Royal Society of Chemistry.

The last two are probably better and more relevant for assignments.
N

...thanks...while i was surfing the net i found this http://addiandcassi.com/category/cyclodextrin/ ... i think those 2 sites and this should cover the current developments of cyclodextrin...3 the magic number..
You must log in or register to reply here.