Can someone explain the Michelson and Morley experiment (in particular the interference pattern stuff)
I sort of understand it but sometimes I doubt my understanding of the experiment and get confused.

What does it mean by "measure the speed of the earth relative to the aether?"
Pls help
this shit if stuffed up

I know leehuan already gave you a massive reply in the other thread, I just thought I'd try and explain

Aether is an absolute frame of reference, meaning it does not move. It's kinda like the background or wallpaper of the universe in a way.
If the Earth is moving at a constant speed through space, let us call it v m/s. Now this speed is relative to the aether, which is not moving. In other words, Earth is moving at v m/s relative to 'space'. Now from Earth, you cannot tell the Earth is moving. From your point of view, you are still and the rest of the universe is moving around you. This is critical because then you realise, if you are moving at v m/s relative to the stationary aether, from Earth it appears that the aether is moving at -v m/s to you, and this is what we call aether wind. Now that we know that if you measure the speed of aether wind from earth, it will be more or less equal to the speed of the earth.

Now here's the tricky bit, how do we do this? If light travels through a 'moving aether' then wouldn't the velocity of the light effectively be c + v? So if we know what C is and what the speed of the aether wind is, we can find v. However we need to know what direction the aether and the light are travelling to resolve the vectors. This is where analogy is comes in very handy. 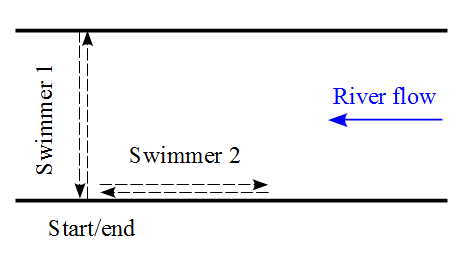 Swimmer B will first swim against the flow of the river, so his effective speed is lowered to 2ms-1 for the first half of the race. 100/2 = 50 seconds for his first leg
However on the way back he's swimming with the flow, so his effective speed is raised to 8ms-1 for the second half. 100/8 = 12.5 seconds for the return journey
So in total it will take Swimmer B 62.5 seconds to complete the race.

Swimmer A faces a bit more of a tricky journey. If he tries to swim straight across, the flow of the water will push him on a diagonal, and so he wouldn't be following the rules. So what he needs to do is swim on an opposite diagonal so the flow of the water will correct his path and so he will go straight (We do this naturally when we swim...apparently). Using some trigonometry which is a bit hard to show here (make a right-angled triangle with the diagonal 5ms-1 vector and the horizontal 3ms-1 vector then use Pythagoras's Theorem to find the resultant straight vector) you will end up with an effective straight line speed of 4ms-1 which won't change coming back because you are still perpendicular to the flow of the water. (100/4)+(100/4) = 50 seconds for the entire journey.

Now from this we know for sure that no matter what, you will always be faster travelling across the flow, than you will be if you go with it, and then against it. This is important.

Looking at the diagram, we see that the aether wind is moving to the left. Hence the beam which is split and sent towards mirror A, is going against, and then with the aether wind. The other beam which is towards mirror B is going across the the wind and back. So from our analogy, the beam coming from mirror B will always be faster. When they recombine, because the 'B' beam got there a little faster than the 'A' beam, they will be out of phase and will hence form and interference pattern when viewed on the inferometer (the detector). This by itself is meaningless however. By rotating the apparatus by 90 degrees (it was floating on liquid mercury), the relative angles will change and hence the interference pattern will also change. By observing the CHANGE in pattern it is possible to calculate the 'velocity' of the aether winds, and hence the speed of the earth relative to the aether. It is important to note that the distance between the mirrors must be equal otherwise since s = d/t, time will be affected if distance changes, and when drawing a diagram/answering a question remember to mention this.

However when Michelson-Morley attempted this experiment, they did not get a change in pattern, and hence they received a null result. They didn't get the wrong result, or the right result - they didn't get a result at all, hence the null result. It is also important to note that the purpose of the experiment was not to determine the existence of aether, it was to determine the velocity of the earth relative to the aether. The existence of aether was merely assumed, and therein lay the problem with the experiment. Einstein's Theory of Special Relativity explained reason behind the null result (not directly, and it's debated whether Einstein was aware of MM's experiment when he came up with SR - according to him he wasn't). SR did not disprove the existence of aether either, by the way. It merely made it redundant. There are still scientists today who believe in the existence of an aether (albeit with different properties and purpose).

Okayyy, anything I left out pls tell me, I'm probably gonna add this to like a physics guide or something
Also, any questions.
R

Thanks for explaining it, I understand it now and if in the future, I have any questions I'll surely let you know.

Did I beat leehuan
K

Nailgun said:
Did I beat leehuan
Click to expand...

Damn the competition is real!

T-R-O-L-O-L said:
Damn the competition is real!
Click to expand...

But good work, that was one excellent explanation!!!!

leehuan said:
Chill. I only got 90 in physics.
Click to expand...

It was a friendly thread, but I don't know what happened.

Nailgun said:
[/QUOTE
That name is ruthless
Click to expand...