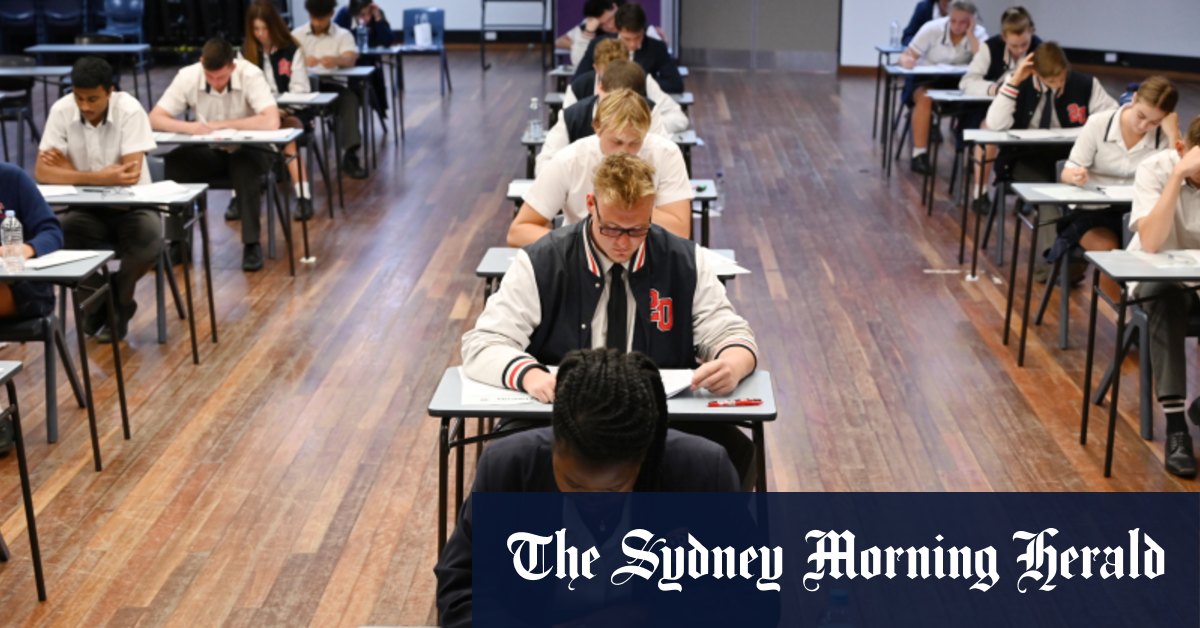 Dr Don Carter, a former NESA inspector, said some year 12s "may be happy with this stroke of good fortune" while others would be more resentful.

Teachers and students have identified "remarkable" similarities between some questions asked in an HSC English exam and trial tests sat earlier this year in hundreds of schools.

Of the 31,347 students who completed the second standard English paper on Wednesday, some were surprised to find questions that resembled those they had already answered in this year's trial HSC papers prepared by the Catholic Secondary Schools Association (CSSA).

Teachers and students have identified "remarkable" similarities between some questions asked in an HSC English exam and trial tests sat earlier this year in hundreds of schools.

Of the 31,347 students who completed the second standard English paper on Wednesday, some were surprised to find questions that resembled those they had already answered in this year's trial HSC papers prepared by the Catholic Secondary Schools Association (CSSA).

The first of three sections in this year's CSSA trial standard English exam, Module A, asked students: "How has the exploration of language in your prescribed text both revealed and disrupted assumptions about culture?"

Some students thought they were reading the same question when they opened Wednesday's HSC paper, which asked: "To what extent does your prescribed text disrupt assumptions about culture?"

One of the questions in the second section, Module B, was also slightly familiar to students who learned about Mark Haddon's Curious Incident of the Dog in the Night-time.

The question in Wednesday's HSC paper asked: "In what ways does The Curious Incident of the Dog in the Night-time invite questions about acceptance and prejudice?"

It featured similar themes to the CSSA trial, which asked: "How do the distinctive qualities of Mark Haddon's novel communicate his commentary on the relationship between acceptance and rejection?"

Executive officer of the NSW English Teachers Association, Eva Gold, said "the coincidences are remarkable". But she said both exam questions had come directly from the syllabus descriptions and could have been legitimately duplicated.

"You would hope that the two papers are sufficiently different," Ms Gold said. "But we have all ‘tipped’ a paper or two in our time and so that similarity is certainly possible, especially when both have stuck closely to the module and its language."

A spokeswoman for the NSW Education Standards Authority, which runs the HSC, said assessment tasks often included similar questions to final exams because schools worked from the same texts and syllabus.

"HSC written exam papers are developed months in advance of exams, by an independent exam committee made up of a team of trained, expert teachers and academics," she said.

"The development of papers includes rigorous quality assurance and are highly confidential ... Students are aware that they can’t rely on prepared responses because they will be marked on how well they address the specific requirements of the question."

Some students questioned the similarities on social media, while others celebrated their luck. One asked an online discussion forum whether anyone else had "the same question for Module A as their trials?". One student replied: "It was either the same or really similar"; another said they "almost cried with joy".

Don Carter, a lecturer in English education and former NESA English inspector, said he was surprised there was overlap across more than one question.

"The similarities are unfortunate because they create the perception that a relatively large cohort of students have had an advantage by undertaking similar questions in their trial exams," Dr Carter said.

"This is significant in the highly competitive and anxiety-inducing HSC regime. While this cohort may be happy with this stroke of good fortune, it may well engender some anger and resentment from other students and their teachers."

Last year's exam - which was the first year the syllabus was tested - had split the section into two 10-mark questions, while NESA sample papers suggested students would be able to choose which form they wrote in.

"Everyone was expecting them to give you a choice of writing either discursive, imaginative or persuasive [styles], and probably do a reflection, but they subverted all our expectations horridly," said HSC student Rakel Gunaidi.

The HSC continues this week with ancient history, construction and economics exams, among others.
Click to expand...

Yeah even my common mod trial question on stories was quite similar to the HSC question... still didnt do as well as I'd like though lol

This has happened before as well...

You must log in or register to reply here.